Between classes I’m a writing tutor. Sometimes my students don’t show up. When this happens, I pull out my sketch book. That’s how the design for my latest level came to me. 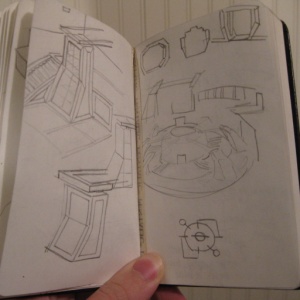 I started by drawing several pillar figures (visible on the right page of the image above). I was thinking about the geometry style in Halo’s multiplayer levels. I started sketching ideas around it, and then hastily drew the general layout at the bottom of the page before I lost the thought. (The left page was from another day when another student forgot to show.)

The second page reiterated the idea with some variation. Rather than having all of the beams lead to the center, like the ramps in the Halo’s Wizard, some rose and others fell (more like the ramps in DM-Deck). The third page added complexity to the layout. There’s very little difference between this and the final level. Even the funiculars (written as inclinators) are noted. Next to this layout is a height analysis. I also started guessing color tones and texture styles that might work. 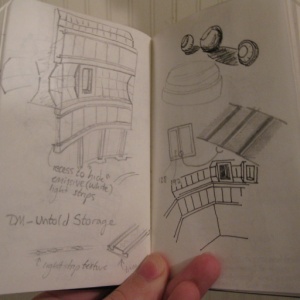 The fourth page cuts away from the wall to expose its depth, but there’s little here I hadn’t drawn before. I drew the fifth page later, once I had toyed with the brushes in the editor and remembered how bad Unreal’s curve collision is, so I redesigned the level as an octagon instead of a circle. The rest of the final page is nonsense doodling.

I’m frankly surprised at how well the level came together. Usually my levels see several iterations, and the transition from a 2D idea to a 3D space seldom goes so well.