In Gone Home the player is Kaitlin Greenbriar, a young woman who has returned to the United States after a year in Europe. While she was away, her family moved to a new house, and the game starts with the player at the front door, facing a note from Kaitlin’s younger sister, Samantha. No one is home, and the game leaves the player to explore the house and piece together clues from the environment to discover what has happened during Kaitlin’s year away.

Gone Home reveals its story through audio diaries and the environment itself. The former, which come from Sam’s journal, are able to describe what the environment cannot: events that leave no evidence, or events outside the house. The audio diaries also require little interpretation from the player, since they are already Sam’s interpretation of events and details. Instead, they function as a supportive structure for what the player observes in the environment. Some details, like letters or notes passed in class, are as revealing as the audio diaries. Others, like a letter Kaitlin’s dad conveniently saved from twenty years before the story’s events, allow for exposition. These may be necessary to present the player with a coherent story, and they are mostly believable, but the moments where Gone Home’s environmental storytelling works best are more subtle.

There is a long history to environmental storytelling in games, but Gone Home is one of the first to dedicate so much attention to it. In older games, most of the objects in an environment were those that served some function. With limits on computer power, rendering and calculating the physics for many useless objects was cost prohibitive. Because most of these games were first person shooters, this limited environmental storytelling to dead bodies, weapons, and ammo. In some games, like Thief and System Shock 2, there might be evidence of a tripped trap, a note beside the body, or bullet holes in the wall to help the player piece together what happened in the moments before death. The number of unique objects in Gone Home wasn’t feasible until recently, and this is why most environmental storytelling has only been about dead bodies. 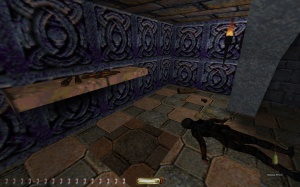 A dead adventurer, some loot, and a trap panel (From Thief 1)

The best definition I’ve found for environmental storytelling comes from the talk, “What Happened Here?” that Matthias Worch and Harvey Smith gave at the 2010 Game Developers Conference. (I recommend listening to the recording and reading the slides if you haven’t already.) Worch and Smith define environmental storytelling as “Staging player-space with environmental properties that can be interpreted as a meaningful whole, furthering the narrative of the game.” This definition fits the examples Worch and Smith give in their talk, and it also fits with most of Gone Home, but their emphasis in the talk—especially their practical tips for environmental storytelling—is on creating chains of events where the player is trying to solve the puzzle of what happened. This is the forensic approach, which has its uses, but it doesn’t explain how some of the stronger moments in Gone Home work.

Terrence’s Office (Note the whiskey on the bookshelf)

For example, one of the first rooms the player enters in Gone Home is an office where Kaitlin’s dad, Terrence works. Instead of depicting a single sequence of events like a puzzle to solve, the objects in the room reflect a range of actions. The chair is pushed away from the desk, and a book is on the seat, suggesting that Terrence read the book at his desk and then left it on the seat instead of returning it to the shelf when he was finished. There is also a bottle of cheap whiskey hidden above the book shelf. Crumpled pages in a waste basket show attempts at the opening paragraph of a novel, and each page has more typos than the page before it. A cork board is covered with sticky notes outlining ideas for the novel. There is also an incomplete product review of a CD player in the typewriter. More than an exposition-heavy letter or an audio diary, these details tell the player who Terrence is.

It also doesn’t matter if the crumpled pages in the waste basket are from the same night that Terrence read the book at his desk or started writing the product review. The mess of notes on the cork board suggest even longer periods spent working in this room. The combination of details in the office tells us about Terrence’s ambitions and frustrations. Instead of having the environment tell a story, the environment depicts the patterns of behavior that let us imagine the character living in the space. We can see Terrence going for the whiskey to relieve his writer’s block on not just one night, but many; we can see more than the few crumpled pages in the waste basket, but the reams he has thrown away. Instead of “What happened here?” the questions become “Who lives here?” and “What kind of person are they?” It becomes about the living present instead of a dead past.

This is also visible in Sam’s room. Where Terrence’s office reflects a certain focus on his occupation and interests, Sam’s room lacks this; it is a teenager’s room. It has an eclecticism from so many interests and ideas built up over years of her life. there is a dinosaur stuffed animal on the bed, a small basketball hoop on the back of a door, and some SNES game cartridges. Sam’s bookshelf has the collection of the kind of classic literature that a teenager reads. Magazines beside the bed and a collage on a locker show Sam’s interests in pop culture. In the closet, there’s the collar of their old cat, Mittens, and a colorful Lisa Frank esque binder from Sam’s elementary school years.

There is a greater sense of sequence here than in Terrence’s office, but it is not the sequence of a single event. The variety of objects show years of Sam’s life building on each other, and the room hints at the process by which Sam has discovered who she is and what she cares about. A discernible chain of events doesn’t really matter here. 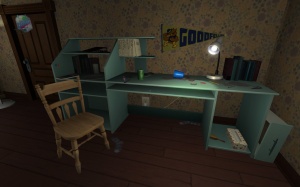 Showing who a person is and not just how they appear is a struggle in games. A model may capture a person’s appearance and it may show their mood, but the appearance alone doesn’t show who that person is. Early Buddhist artists faced a similar problem with depicting Buddha. Instead of making a sculpture of the man, they created footprints, empty sandals, and empty chairs. They implied his presence without showing him, and this gave the emptiness a sense of space and life that statues depicting Buddha lack. The strongest environments in Gone Home achieve the same effect. When we walk through these rooms, and see the how their occupants have shaped them, they come to life, not as single events, but as months and years played out at once.