I want to talk about some problems with player versus player games. In abstract, these problems are difficult to describe, so I want to talk about them through two matches of Halo multiplayer. These are matches where I played with a group of friends against unknown opponents through Halo’s matchmaking system. The specifics of these matches bring the problems of PvP into focus.

Our first match was on “Derelict,” a two-tier octagonal map with a central tower and walkways connecting to an outer ring. Together, the tower and walkways occlude the lower floor into quadrants. The only routes up are through teleports, which deposit the player 45 degrees offset from their entrance, relative to the center. The teleport entrances and exits are in the open, with the best cover being the teleport itself. 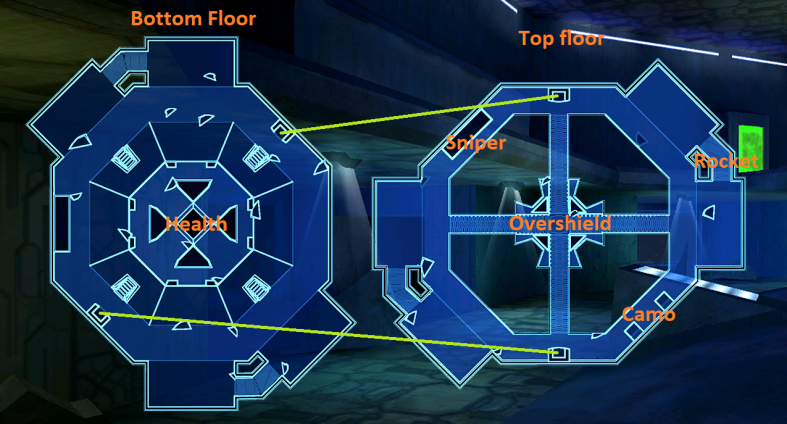 In the Team Slayer mode where kills equal points, all of the powerups spawn on the top floor. The overshield in the top center is the most important, and also the easiest to contest since the walls around it allow players on the bottom floor to bank grenades. Players who rush the teleports to the top floor have long sightlines down the walkways and past the overshield to the far side. In a coordinated attack, anyone by the overshield is doomed. View from the top floor.

With the combination of the item placement and the respawn mechanics, the dominant strategy of “Derelict” is to control the top floor and kill the enemy players as they rush the teleports. Even in Team Slayer, “Derelict” plays like King of the Hill. 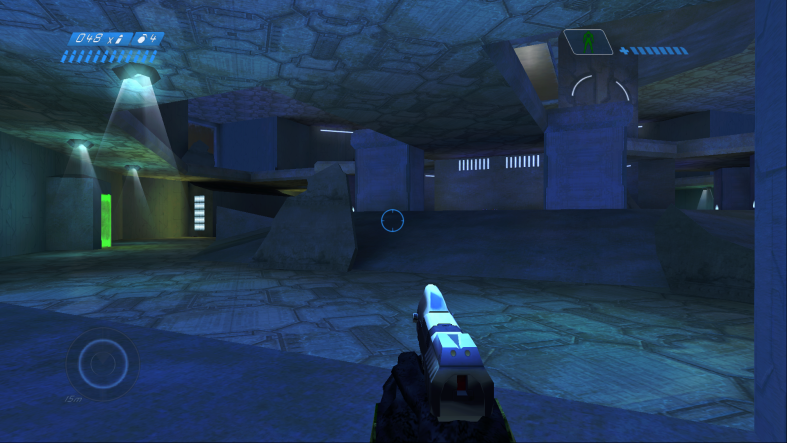 View from the bottom floor.

A final note before I get into the match’s specifics: in Halo, players spawn with an ineffective assault rifle equipped and have to switch to their secondary weapon, the pistol, to have a chance in a fight. This weapon swap means more than a second of vulnerability where the newly-spawned player can’t pressure an attacker to back off.

Altogether, these systems turn Team Slayer on “Derelict” into a grinding slog.

In this specific match on “Derelict,” two of our four opponents dropped from the game within the first minute. By that time, my friends and I had started to control the top floor and the powerups. With only two opponents remaining, this imbalance guaranteed our map control, but this also slowed my team’s score per minute and drew out our inevitable win.

After this match, we looked up our opponents’ stats and saw that they were new players with only a few matches of experience. My team’s attempt to efficiently end the match (and get on to something better) may have spoiled Halo 1 to these players. But because there are no easy systems for communicating across teams in Halo, the entire experience was an anonymous cruelty.

When players are outnumbered in these situations, some choose to give up the match or “deny” it by preventing the other team from having fun. These players may set the controller down and walk away until the game ends as a passive rejection of the match. Or, in a more active rejection, they may kill their allies, jump off the map, or frag themselves on spawn. This behavior extends the game time, since it slows the rate at which the stronger team can score points, but it is a way for the losing team to control the pace of the game and reject the systems that put them there. Some of the behavior we commonly label toxic play or poor sportsmanship may stem from bad systems design.

Even on Halo’s best maps, 4v2 matches are common. In The Master Chief Collection, the queue for Team Slayer lets players vote on a random map from each game in the Halo trilogy, and the original Halo is divisive. Unlike Halo 2 and 3, Halo: CE’s levels are difficult to learn, which adds to the gap between experienced and new players. There are no maps like “Derelict” in Halo’s sequels. As soon as this skill and knowledge difference between the teams becomes apparent, the players on the losing team are stuck in a bad situation. If they leave too many games, they will face an automatic deserter penalty and may also face Xbox Live’s player reporting systems for desertion or bad sportsmanship.

As a player, it isn’t clear what many of these systems do. As a designer, it seems to me that the blame should fall on the systems that insisted a 4v2 match play to its end. Even before the match became a 4v2, the blame should fall on the matchmaking instead of the less experienced players. But there’s only so much that matchmaking algorithms can do on a small player population without dividing player parties. In designing these systems, we should ask ourselves who these systems are supposed to serve.

After this lopsided victory, our next match went to “Longest”, a small map with two parallel hallways and elevated rooms to either side. There are no rocket launchers or sniper rifles on “Longest”, but the standard grenades and pistols are more effective in the narrow gameplay space. 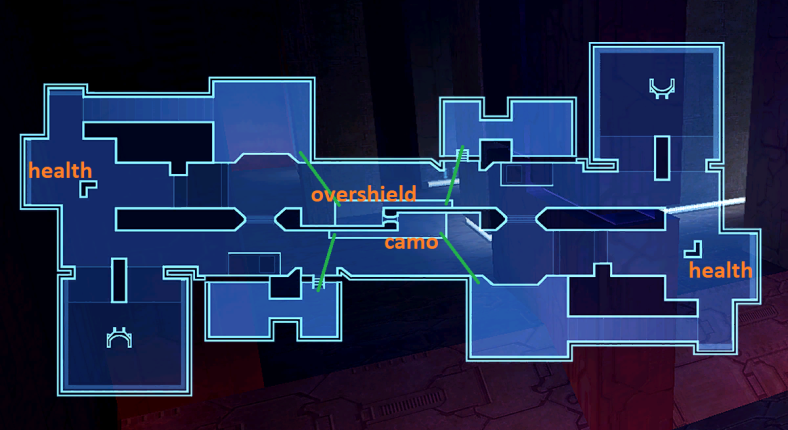 The green lines indicate jump routes between platforms on the second floor.

At either end of the hallways are a red and blue base, a health pack, and an enclosed ramp up to the second floor. These bases are where the players spawn. Aside from walking the long halls, the only other route is jumping across platforms on the second floor. Up here in the middle there is a powerup on either side, swapping between overshield and active camo after each use. This jump route is outside the lethal range of grenades on the floor below, but Halo’s floaty jump makes these players exposed to pistol fire. A view from blue base down the hall toward red. The overshield is in the top center platform.

As a result of this structure, the map plays like a teeter-totter of balance swaps. At the start, both teams fight down the long hallways and push toward the far side. The team that wins the fight in the halls can continue the push into the enemy base, and if they kill all of their opponents there, the spawns will swap so that red team now spawns in blue base and blue now spawns in red. This spawn swap resets the fight, giving both teams a chance at a new push.

This spawn-swapping property, which emerges as an interaction of the level design and the respawn system, makes “Longest” more forgiving than a map like “Derelict”. Even after a bad start, the losing team on “Longest” has a chance to recover. The limited items also reduce how far ahead the winning team can be. The grenades and health items on the map are only useful to recover to the starting amount.

Even though “Longest” is a more balanced map, our second match started much like our match on “Derelict”. Within the first minute, two of our opponents left. However, instead of another frustrating victory, I persuaded my teammates to stop shooting and to only use grenades and melee. The grenades are still effective, but players are limited to four, and must then find more grenades in the dangerous midfield, or must charge the enemies in melee combat. There is also friendly-fire, so our over-use of grenades turned the map into a hilarious chaos. Red base, and an exploding grenade, for scale.

Despite our numbers advantage, by applying our own rule modifier, the opposing team was in the lead until the last few kills at which point we resumed standard play. Our opponents also appeared to join in on our grenade-happy shenanigans, with one of them scoring 10 grenade kills in the match. Most importantly, the opposing players remained active despite the odds, rather than turning to fun-denying strategies.

However, across the silent gulf of Xbox Live, I don’t know what our opponents thought, or if they recognized that we had changed the rules of the game to keep it fun. On our side, a few of my teammates saw the rule adaptation as a way to humiliate instead of merely win; perhaps this is how our opponents felt. Without means to communicate across teams, it is unclear whether our rule modification improved the situation.

Problems
1. Those with power in a match define its pace. Power here may mean having a numbers advantage, not just being the more skilled group of players. The responsibility falls on the dominant group to adapt their play for everyone’s enjoyment.

2. Reinforcing feedback loops or “snowballing” in level design, where the team that takes the lead can easily maintain it.

4. Rigid multiplayer that lacks communication tools for players to negotiate their goals and restructure the match.

Real World PvP
With each of these problems, we should compare the situation to real world player versus player games. That is, if we played this matchmade game on the greens of a public park, would we play the game to its end without modification? If not, then this is a case where the rigidity of a digital game’s multiplayer systems does not serve the players’ needs.

With these specific examples from Halo, imagine instead if the 8 of us were playing a game of soccer and two players had to leave. In the real world, the game is a servant to its players and will flex to accommodate their needs. The moment two players leave, the remaining 6 can decide if they want to continue with the game, and how they want to restructure the team if so. Or, if the match was more serious, the players can negotiate a rematch for the future.

In digital games, the rules are too often inflexible. There aren’t systems in Halo to negotiate a rule change part way through a match. This negotiation could include a mode change, or a team restructure. In both of the 4v2 matches above, Halo could have prompted a vote to make the game free for all, to scramble the teams, to end the match early, or to seek players to join in progress.

My hypothesis around this experiment is that we would see healthier player interaction, and we would see player needs rise in priority above competition. Ideally, this experiment would reduce the toxicity that drives players away from PvP gaming. However, it may also be that denying players’ competitive motivations through these systems reduces player engagement and retention.

This is an area I hope to investigate further in the future.